Something they are really good at here in Mexico is waiting. That’s something I’ve been having to do rather a lot of recently. If in doubt, the culture seems to be – wait. Its a philosophy granted, and no doubt partly why the Mexicans seem to be such warm, laid back people. But in being frustratingly forced to wait so long, I couldn’t help thinking (and yes, no doubt this is the Brit – rather, the Londoner in me) ‘why not just think of a way round this, a simple, ever so slightly creative solution so we don’t HAVE to wait?!’.

Yesterday I took a journey from Zipolite on the south coast of Oaxaca state to Oaxaca city. Google maps told me the journey would be 3.5 hours, the woman at the hostel I was in said 6 hours, and in reality it took… 9.5 hours. Yay! I f***n’ love it here! That’s really what I prefer to do with my travelling time, spend it sat on a mode of transport. Well its just was well as to date more of my time since leaving the UK has been spent getting from a to b than actually being on holiday! Bitter? Moi? Never*
*(pssst: its OK, it gets better)

Of course we left late – but then the real delays came when we stopped at the next village after driving for about 10 minutes. Hilarious, frustrating and distressing in equal measure, we were stopped for a good half hour in the 34 degree heat of the midday sun cramped into a small tin mini bus and waited for several things to happen.

Firstly, the driver had to load on new passengers, and this included (to my distress) hauling a barking dog and meowing cat in their boxes onto the top of the van to tie them down with the other luggage. The dogs cage bashed against the side of the van several times which made his owner cry & she (rightly!) insisted they take him out so he could sit on her lap for the journey. The cat stayed on top of the bus the whole mountainous journey as far as I’m aware. Then a woman got on the bus and said lots of things in Spanish which sounded like they were trying to work out who was supposed to sit where. Really?! How can this matter on a small tin can of a van like this?? Sell the right number of tickets and it doesn’t matter where people sit surely?! But still, we had to get up and move seats so it matched with what it said on our ticket.

Ok so then at last we ‘vamosed’. Then we stopped again and pulled into a bus garage (FFS!!) and stopped for 20 minutes while another woman got on the bus and called our names, ticking us all off, having lots of Spanish conversations. There was always someone not in the bus when we wanted to leave (on a later stop it was me as after dithering about whether to go to ‘el bano’, being so unsure of how long we would stop for & too afraid to try and ask in Spanish! (we were just left guessing how long most stops would be) I wondered if I’d make it back to the bus in time).

At long last we made it off and out into the mountains. And I have to say, the views were not too shoddy… 🙂

We eventually reached Oaxaca city which we seemed to drive through for an absolute age! I thought this was supposed to be a small city!’ I thought to myself. (which I’d been incorrectly informed, and believed without question, not having bothered to buy a guide myself). Then ‘God its not even that pretty here from what I can see. FFS. What’s the point anyway :/’. Yeah, I was pretty tired by that stage and had only just recovered from a bout of short but violent sunstroke from which I will spare you the details…

So we eventually reached a bus station- I had no idea what my stop was supposed to be and just trusted it was the last one (it was). I got out with my stuff which felt just way heavier now and tried to hail a cab. No joy; ALL the cabs were full. Someone inside the bus station kindly came out to help me – telling me, ‘only the yellow taxis’. OK, but none of the yellow taxis – nor any of the others for that matter – were free at all! The guy next me was just – well, waiting. And I thought, maybe I should go elsewhere, you know – try something else to find a taxi as its not working here? But he was a local, I was tired, I had loads of things with me and I was in a strange city. After half an hour of what must have been near to 40 taxis driving past all with people in them, I felt like giving up.

‘What’s the point? What am I even DOING here?! This is supposed to make me happy! I’m supposed to be having fun! Maybe the only way to really be happy is to have a child! Oh God I’ve got it all wrong! I’ll never be happy! I must find a way to have a child immediately!’. Yep, insecure Caz (which shall hitherto be my nickname) reared her ugly head as she is wont to do after a bout of severe sunstroke took out my last 2 days in Zipolite, followed by an infuriating if sometimes beautiful journey that hadn’t even bloody ended yet in a country where I didn’t speak the language!

And yet, as if the universe heard my cry (bear with me…) I was then fortunate enough to witness, be caught up in even, what turned out to be (though I had no idea at the time) the wonder of;

This was one of the most delightful, energetic, bonkers and silly things I have ever seen! First of all kids were launching ear blistering fireworks from the middle of the street, including Catherine wheels which just hurled around at peoples faces inside the crowd. Dangerous, much?? There were enormous, somehow slightly ridiculous looking puppets – probably because the people inside them were dancing so frantically & swinging the puppets’ flaccid arms around hitting people (accidentally) in an unintentionally hilarious way to the (at least) 5 brass and other bands playing jolly, upbeat Mexican music that you just couldn’t help shaking your stuff to (well I couldn’t!).

There were women in beautiful outfits, dancing all flirty with their skirts & with huge baskets of flowers on their heads. I decided I want to join the next parade dressed like this!

And there was all kinds of wonderous crafty parade art & floats with kids proudly (and very seriously) posing in full get up representing…? some kind of religious figures? (I have since found out that the children posing in these enormous dresses are in fact representing the Virgin of the Guadalupe, which makes sense!). 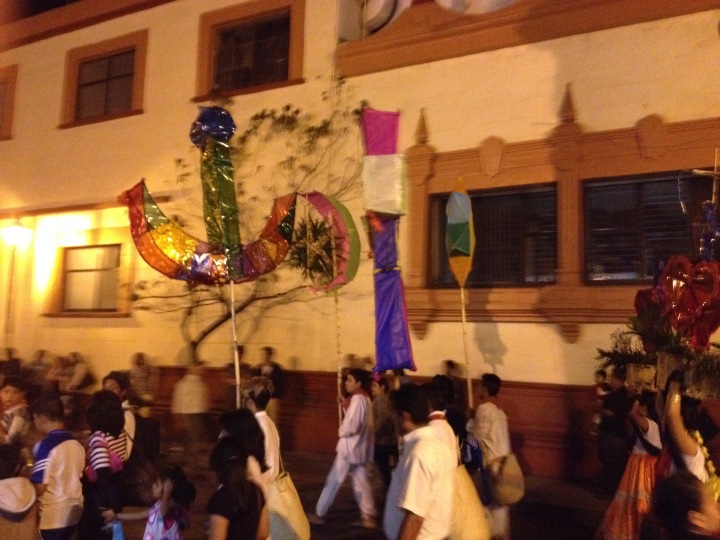 So, I concede that one of the 9.5 hours of my journey was spent in delight watching this parade. Not the worst way to pass the time. Oh and I managed to slightly stave my hunger from 9 hours of eating only crisp breads by forcing my way through the crowd to access one of the baguettes on offer (looked like chocolate spread and feta – turned out to be bean paste and feta). I decided I would dance through the crowd if necessary to secure said food.

In the meantime you’ll be pleased to know there’s been more waiting. Waiting for the water to go hot as they advised me in to do at the hostel so I could have a shower last night after my long journey (it didn’t). Specially requesting the hot water be turned on early and then waiting for it to go hot this morning so I could have a hot shower (it didn’t, even though I came down in my towel to discuss with them and they told me it was hot: it wasn’t). Waiting for the internet, which is MUCHOS LENTO!! As an internet addict this is definitely the biggest challenge for me (aside from sometimes not having anyone to talk to – when WhatsApp doesn’t work and/or its 4am in London I cant even call my mates!).

Anyway, watch this space – there’s another delight round the corner. I just haven’t been able to write about it yet as – guess what – the internet is so bloody slow!!